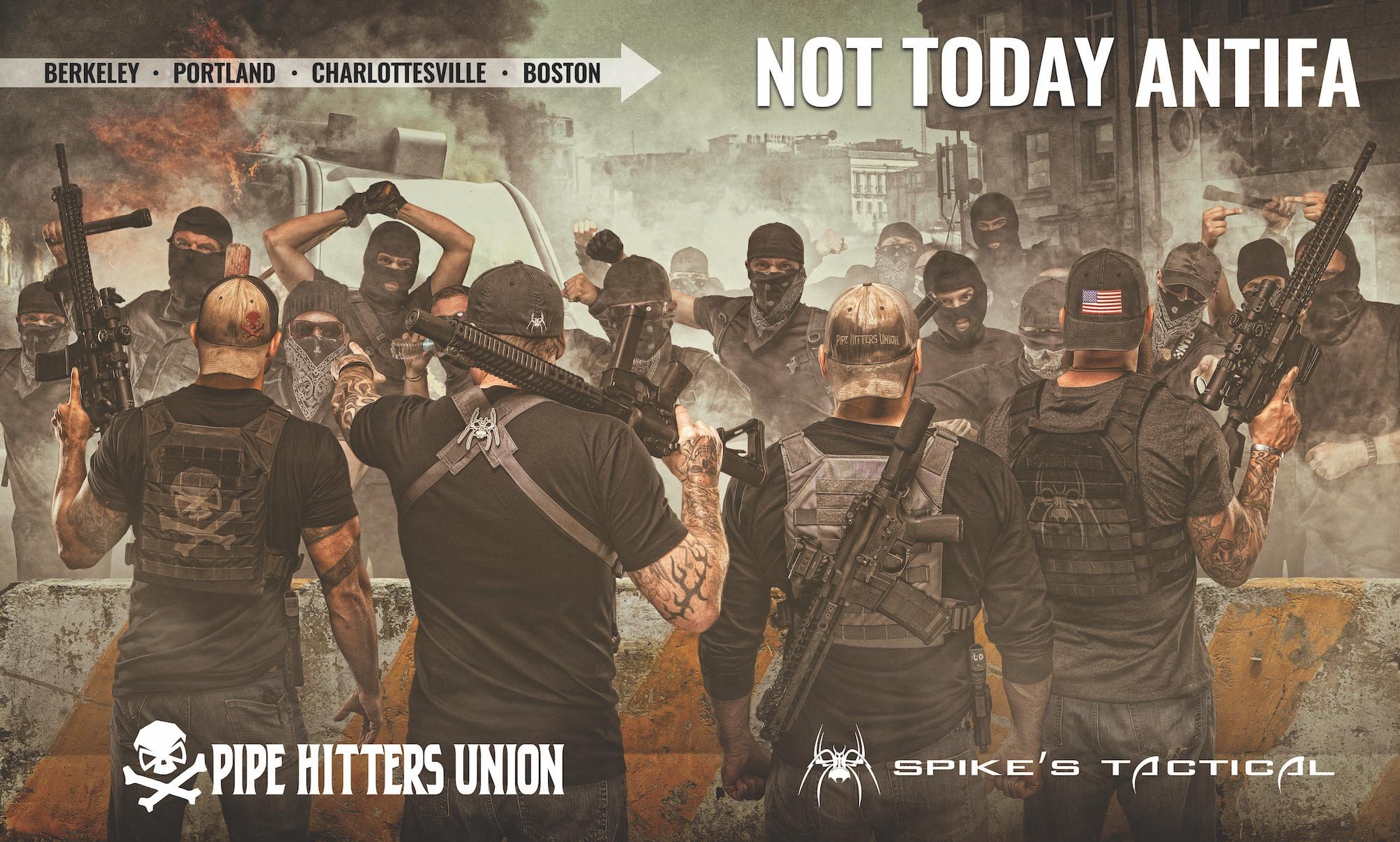 APOPKA, Fla. – Spike’s Tactical, a national AR-15 parts and weapons manufacturer based near Orlando, Florida, and Pipe Hitters Union, an international apparel manufacturer based in Austin, Texas, were attacked by Newsweek on Monday for an advertisement the companies recently ran in SKILLSET Magazine and posted on Facebook earlier this week.

“Our advertisement, NOT TODAY ANTIFA, is meant to be pro-American and against those who would suppress freedom of speech and the rest of our constitutionally protected rights, including the right to bear arms,” said Kit Cope, spokesman for Spike’s Tactical. “We offer zero apologies to anyone that is offended by this advertisement that depicts armed, but peaceful, patriotic Americans standing up against socialist, anarchist and communist rioters.”

The dual-page ad, which was designed for and is scheduled to run in RECOIL Magazine for the 2018 SHOT Show in Las Vegas, was commissioned as a joint advertisement between Spike’s Tactical and Pipe Hitters Union.

“We had no idea this ad would become so controversial, but let me be very clear about one point – We are not and do not support Nazis or any white supremacist movement in any shape or form,” said Lincoln A. Osiris, president of Pipe Hitters Union. “Every year we do a centerfold ad together with Spike’s Tactical for SHOT Show, and this year, after the rioting in several cities throughout the U.S., we decided to address those who are anti-American, anti-government and anti-democracy in our advertisement. We believe that anyone who supports this great nation, the Constitution and our democratic republic supports our stance.”

According to Osiris, that stance is that the people who are behind the Antifa movement are anti-American.

“They often incite violence, cause property damage and commit crimes, while hiding behind a veil of anti-fascism, but in reality they are no more than an unorganized group of domestic terrorists.” Osiris said.

According to representatives from both companies, the Newsweek article contains several errors, one of which is the claim that the group of masked protestors in the advertisement are unarmed. The image clearly depicts the protestors holding weapons. Additionally, the article insinuates that Spike’s Tactical and Pipe Hitters Union support neo-Nazis and white supremacists, which is categorically false.

“Neither of our brands support anything other than America, our military and members of law enforcement,” said Osiris. “Many of us at both companies wore the uniform and swore an oath to defend this country against all enemies, both foreign and domestic, and that oath doesn’t have an expiration date.”

Additionally, Newsweek accuses Spike’s Tactical of using anger over Antifa to sell, “dangerous assault rifles to only one side,” and says anti-fascists are worried that it fuels a desire to kill leftists.

“We would never advocate violence, unless it is in the form of self-defense,” said Cope. “And for the record, our rifles are available for sale to any responsible person who is legally allowed to own a firearm, regardless of how they register to vote,” said Cope.

Furthermore, the writer for Newsweek says that neither company responded for requests to comment, however, he attempted to contact the companies after business hours and published his article that evening.

About Pipe Hitters Union
Pipe Hitters Union is a disabled combat veteran-owned and operated small business, founded in 2004 and headquartered in Austin, Texas. PHU was founded by a small group of special operations combat veterans that shared a common belief in the unity of cause, the willingness to face extreme obstacles head on and the absolute refusal to backdown in the face of adversity. Since then, the message has spread to like-minded individuals from all professions and walks of life. Whether military, law enforcement or civilian, Pipe Hitters throughout the world are pushing their limits daily and making their mark. The PHU brand is a mark of distinction and a call for others to join us.